October 6, 2021 and 81 years ago on this day in 1940, Edgar Rice Burroughs began writing “Men of the Bronze Age,” which would ultimately become the second installment of “Savage Pellucidar.” It was originally published in “Amazing” in March 1942, reprinted in ‘Amazing Stories Quarterly in the fall of 1942, and published as part of the first edition of “Savage Pellucidar” by Canaveral Press on November 25, 1963. I especially enjoyed this book. I thought ERB wrote it a little tongue in cheek. The character, “The little man who wasn’t Dolly Dorcas” remains one of my favorites – even though he was a cannibal.

“Men of the Bronze Age,” got a cover mention by “Amazing” in 1942, but the cover illustration went to “Disciples of Destiny” by Don Wilcox. The illustration with this article and drabble is by J. Allen St. John.

The publishing history of Savage Pellucidar and several illustrations may be viewed at: https://www.erbzine.com/mag7/0747.html

The 100 word drabble for today, “Positive Landing,” was inspired by “Men of the Bronze Age,” and the title of the drabble, “Positive Landing,” is a pilot’s euphemism for a hard landing, especially appropriate for today, the fifth day of the Albuquerque International Balloon Fiesta. However, I checked with the FAA and there wasn’t a  NOTAM this morning for flying reptiles during the flight window.

Dian the Beautiful was in one of Abner Perry’s inventions, a balloon. The craft escaped its moorings and rose quickly toward the central sun.

A winged reptile, a thipdar, circled the balloon. Dian couldn’t make the balloon rise higher, but she opened the gas valve and the balloon dropped like a rock.

The thipdar became entangled in balloon’s ropes. His struggles slowed the balloon’s descent into tall trees where tree dwellers killed the thipdar, Dian slipped to the ground.

She said, “Abner, I’m sorry I broke your balloon.”

“You walked away from the landing. Don’t apologize. Take credit for it.” 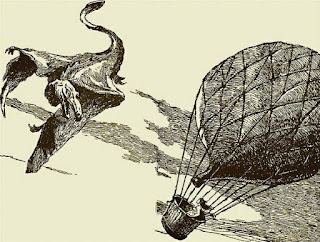 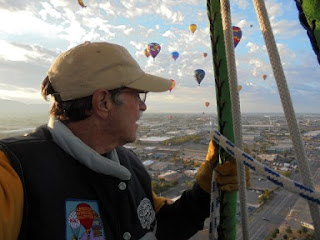 Posted by Robert Allen Lupton at 2:59 PM No comments:

October 5, 2021 and eighteen years ago on this date in 2003, Travis Fimmel wandered into New York as Tarzan in a new Warner Bros. series. Alas, or fortunately. depending on your personal feelings, the show was canceled after only a few weeks. Even Xena the Warrior Princess wasn’t enough to interest the viewers. Lucy Lawless was cast as a Tarzan relative named Kathleen Clayton. Sarah Wayne Callies played the part of Jane Porter, a New York detective. Nine episodes were filmed but the series was quickly canceled, even though the show attracted a whopping 2.8 million viewers! Unfortunately, 2.8 million isn’t that large an audience and Tarzan placed 112th among primetime programs!

The drabble for today is about the concept of the short lived series. “Keep it Simple” is the title of today’s 100 word drabble.

Lucy Lawless said to show creator, Eric Kripe, “The script says I’m Tarzan’s aunt or some crap like that. Tarzan doesn’t have any female relatives.”

Travis said, “I may just be a pretty face, but Tarzan belongs in the jungle, not Manhattan and a billionaire uncle – really.”

Kripe smiled, ‘So you don’t think this is going to work.”

Lawless shook her head. “It’ll never get off the ground, too many moving parts.” 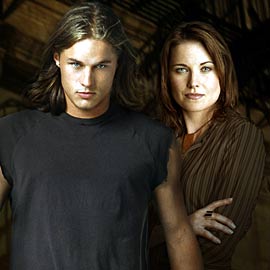 Posted by Robert Allen Lupton at 2:56 PM No comments: 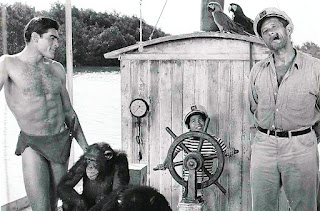 October 4, 2021 and 105 years ago on this day in 1916, actor Jan Murray was born as Murray Janofsky in the Bronx, New York. Murray played Captain Sam Bishop in “Tarzan and the Great River.”

He hosted quiz shows, made countless television appearances and played Icabod Crane on Kolchak: The Night Stalker in 1974 and Simon Sweet on “The Man From Uncle” in 1967.

Murray began his show business career as a standup comedian.

The 100 word drabble for today is “Food for Thought,” and it’s taken from Jan Murray’s comic routines.

“Dieting is a system of starving yourself to death so you can live a little longer. Chubby Checker lost pounds by demonstrating how to move as if you were drying your back with a towel. The substitution of the word back for bottom indicates the oddly wholesome image of the twist. Hunger is real. Russia needs our wheat. We can’t expect them to invade countries on empty stomachs.

Posted by Robert Allen Lupton at 2:53 PM No comments:

October 2, 2021 and 109 years ago in 1912, Edgar Rice Burroughs finished writing the sequel to “A Princess of Mars.” The manuscript for “Gods of Mars” was mailed to Metcalf at Munsey Magazines that same day, who bought first magazine rights to the story and published it in “The All-Story,” from January through May of 1913. Fred Small drew a single black and white headpiece that was used at the beginning of each installment. “The Gods of Mars” never had amagazine cover. The issue with the first installment had a cover for “Sands o’ Life,” a Pirate Yarn by William Patterson White. Other writers in the issue included Jonathan Shift, Oliver Goldsmith, and Frank Condon.

The 100 word drabble for today, “Skill, Not Size,” was inspired by the novel, “The Gods of Mars.”

After ten long years, John Carter was astrally returned to the Valley Dor on Mars where he found his old friend Tars Tarkas, a Green Martian. They were attacked by plant men and hid inside a cave where they were locked inside.

Soon the door opened and a score of yellow-haired men carrying longswords attacked them. John Carter found a knife and killed all twenty of the men. Tarkas said, “Very impressive. They had longswords and you had but a single knife.”

Carter replied, “It doesn’t matter how big your sword is if you don’t know how to use it!” 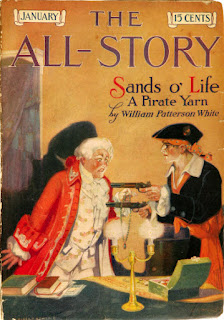 Posted by Robert Allen Lupton at 2:50 PM No comments:

James Neil Hamilton - Commissioner Gordon on Batman and Harry Holt in "Tarzan and his Mate: died on this day in 1989

September 24, 2021, happy birthday to me. 37 years ago on this day in 1984, actor James Neil Hamilton passed away at age 84. This is the second article and drabble about Hamilton this month. He was born on September 9, 1989. Hamilton, who played Commissioner Gordon in television’s Batman, but not Perry White in “The Adventures of Superman,” (Different Hamilton – no relation.) played Harry Holt in the  Johnny Weissmuller / Maureen O’Sullivan films, “Tarzan, the Ape Man” and “Tarzan and his Mate.”

The 100 word drabble for today is “Too Many Women,” and includes the titles of 16 his films, 17 counting the title. See if you can find them all.

“What a night. Seemed like three weekends. Something always happens when you meet a dangerous woman.”

“Tell me. I met a dangerous lady. She said, ‘Take me home.’ I said, ‘Lady behave. I’ll spend the night all by myself.”

“Neil said, ‘The hot news is the sky’s the limit when strangers may kiss,’ but I saw the devil’s hand in her plot. About an hour ago I took the family jewels and came to work.” 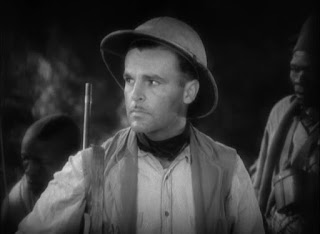 Posted by Robert Allen Lupton at 11:09 AM No comments:

September 23, 2021 and 55 years ago on this day in 1966, the third episode of the Ron Ely television Tarzan was broadcast. “Leopard on the Loose” The episode featured Russ Tamblyn, Alan Caillou, Ken Scott, and Morgan Jones.

A worker at the local trading post needed money to get home and he decided to steal Jai’s leopard and sell the beast.

A complete list of the episodes is at: https://www.erbzine.com/mag74/7420.html

The drabble for today, “Give It Back,” was inspired by “Leopard on the Loose.”

Morrisey, a trading post worker, wanted desperately to go home. He stole Jai’s leopard planning to sell him to some hunters. He leashed the leopard and led it toward the hunter’s camp.

The leopard cooperated briefly, but it missed Jai and struggled. Morrisey wrapped the leash around a tree and held it so the leopard couldn’t bite him.

Tarzan laughed. “Sometimes the worst thing in the world is to get what you want. You wanted a leopard. You dealt the cards, you play the hand.” 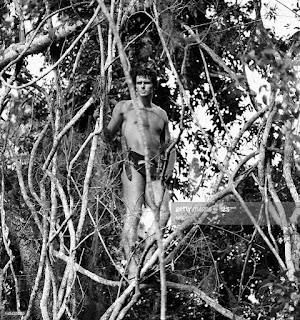 Posted by Robert Allen Lupton at 11:06 AM No comments:

September 22, 2021 and on this day 102 years ago, Edgar Rice Burroughs began writing “The Efficiency Expert,” a novel / novelette based on his experiences as a businessman. The story was serialized in four installments of All-Story Weekly in October of 1928. This was ERB’s thirty-sixth novel. He wrote in 31 days. The first edition of the book was published by House of Greystoke in 1966 and reprinted as Burroughs Bulletins #57-58 in 1976. Unlike most of ERB’s work, I haven’t been able to find a foreign edition.

Charter published a paperback version of the book in June 1979, the only mass edition of the book. Since 2000, the story has been published by people believing the story to be in public domain: Amereon House. Wildside Press, Pulpville Press, and ERBville Press (not associated with ERB Inc.)

Publishing details and the entire text of the original pulp magazine version are available at: https://www.erbzine.com/mag7/0768.html

The drabble for today is “For Efficiencies Sake,” and it was inspired by the novel.

The shop foreman said, “Everyone is busy. How can you help?”

Torrence said, “The more efficient you are at doing the wrong thing, the wronger you become. It is much better to do the right thing wronger than the wrong thing righter. Reorganizing can create the illusion of progress while producing confusion, inefficiency, and demoralization.”

“How nice. What qualifies you as an expert?”

“I came from elsewhere and not accountable for the results of my recommendations.”

‘How does that work?”

“If things get better, I take the credit. If they get worse, I’ll say you didn’t do what I recommended!” 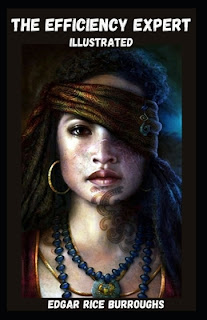 Posted by Robert Allen Lupton at 2:39 PM No comments:

Robert Allen Lupton
Robert Allen Lupton is retired and is a runner, writer and commercial hot air balloon pilot. Robert runs and writes every day, but not necessarily in that order. More than seventy of his short stories have been published in several anthologies including the NYT best seller, “Chicken Soup For the Soul – Running For Good”, and online at www.horrortree.com, www.crimsonstreets.com, www.aurorawolf.com, www.stupefyingstories.blogspot.com, www.fairytalemagazine.com, and www.allegoryezine.com. Over 350 drabbles based on the worlds of Edgar Rice Burroughs and several articles are available online at www.erbzine.com. His novel, Foxborn, was published in April 2017 and the sequel, Dragonborn, in June 2018. His collection of running themed horror, science fiction, and adventure stories, Running Into Trouble, was published in October 2017. His annotated edition of John Monro’s 1897 novel, A Trip To Venus, was released in September 2018. His stories have received five honorable mention awards from “Writers of the Future.”